18.03.2021 - Tsubame BHB was established in April of 2017 based on a new catalyst technology developed by Prof. em. Hideo Hosono at the ­Tokyo Institute of Technology (Tokyo Tech), which allows an ammonia process at lower temperature and pressure.

The overall process designed by Tsubame BHB provides a new small-scale ammonia production technology as an alternative to the common large-scale, centralized production. The Japanese start-up company aims to put the world‘s first on-site ammonia synthesis system into practical use and provide ammonia in remote areas via this process with low environmental impact. Masahiro Watanabe, representative director and CEO, explains the vision and strategy of the company.


CHEManager: How did the company, Tsubame BHB start?

Masahiro Watanabe: The new ammonia synthesis catalyst developed by the group of Professor Hosono at Tokyo Tech provides the possibility to run the process at lower temperatures and lower pressure than the conventional Haber-Bosch synthesis. As a consequence, this catalyst provides the possibility to produce ammonia economically on a smaller scale. We founded Tsubame BHB to commercialize this new technology by developing and designing the process around the catalyst.

What had been the biggest hurdles to overcome so far?

The catalyst you are using is quite extraordinary. How did its development start at all?

M. Watanabe: For the first time, Prof. em. Hosono realized the synthesis of an electride — an electronized material where electrons behave as negative ions — at Tokyo Tech. He discovered an electride by replacing oxide ions inside the cage structure of 12CaO · 7Al2O3, a constituent of commercial alumina cement, with electrons. The discovery was published in 2003. The Hosono group later on applied the compound as a catalyst for synthesizing ammonia, thinking that the bond of nitrogen molecules could be easily cleaved by utilizing the elec­tron-donating property of this C12A7 electride, and it was found to be better than the conventional catalysts.

In which development phase is your process?

M. Watanabe: In December 2019 we constructed a pilot plant in order to demonstrate the commercial viability of the technology as well as to optimize process conditions and the catalyst. So far, the tests run in the pilot plant showed that the catalytic activity is higher than in laboratory tests, so the catalyst amount can likely be reduced by 30%. Also, we found that continuous operation with an annual capacity of 20 tons is possible without any significant loss in catalytic performance. The ease of handling, the safety, and the activity of the catalyst could be confirmed, and a number of verifications could be conducted with the goal of improving the practical use in the next years.

Where could this new process be applied?

M. Watanabe: We believe, there is a big market potential for an on-site production technology that provides an alternative to the common monopo­lar concentration and mass production of ammonia. On one hand, it reduces transportation and storage costs and can provide ammonia in remote areas or in countries without domestic ammonia production. On the other hand, the technology contributes to an environmentally friendly and sustainable energy supply by offering the possibility to complement ‘green hydrogen’ as a means of transportation and storage.

M. Watanabe: The basic design phase of our standard-size modular system with 3,000 mto/y and 5,000 mto/y, respectively, is already completed, and currently customers are evaluating our proposal. Moreover, we also offer an EPC-type sales model, which is suitable for customers with a demand of more than 10,000 mto/y. We believe, that we will received the first purchase order for a commercial plant within this year.

What is Tsubame BHB’s vision and mission?

M. Watanabe: Our mission is: We will solve current issues related to environmental problems and food supplies by utilizing a unique technology and realize a sustainable society. Our vision has various aspects: Firstly, applying a new technology originating from colleges and universities, promoting development through active collaboration with other companies, and initiating supply chain innovation in the ammonia industry.

Furthermore, our innovation will provide means to solve the problems of the uneven distribution of supplies and the depletion of resources in the food sector, and it will support sustainable and more environmentally friendly energy supply and distribution. And finally, we will develop human resources who can implement creative technologies in society, promote technological development that reduces environmental impact, and ensure sustainability.

What does the name Tsubame BHB mean?

M. Watanabe: Tsubame is the Japan­ese term for swallow, which is the bird depicted in the seal of Tokyo Tech. In Japan, swallows traditionally portend good fortune. And BHB stands for „Beyond Haber-Bosch“, which is how we define our mission.

PERSONAL PROFILE
Masahiro Watanabe graduated from the International Christian University with a degree in physics. In 1976, Mr. Watanabe began his career at Chiyoda Corporation and worked for refinery plant constructions in Saudia Arabia and in Indonesia for an LNG production project. Mr. Watanabe joined Chiyoda Advanced Solutions called ChAS, an affiliate company of Chiyoda Corp., as sales director in 2002 and was later promoted to executive director, and, in 2009, to president and CEO. In June 2019, Mr. Watanabe assumed the position of CEO of Tsubame BHB.

Although developed about 110 years ago, the Haber-Bosch process is still the standard process for ammonia synthesis all over the world. However, the Haber-Bosch process requires high pressure and high temperature conditions, such as 400–600 °C and 20–100 MPa. Due to those special conditions, typical ammonia plants are constructed in large scale and mainly concentrated in specific areas with adequate raw material supply.

New technology enables easy and convenient use of ammonia

The target of Tsubame BHB’s process is to achieve small-scale onsite ammonia production in distributed areas where ammonia or nitrogen fertilizer is needed.  The current centralized production of ammonia requires transportation and storage between the production and demand location. Because ammonia has a very low dew point and is poisonous and environmentally hazardous, the transportation and storage costs are high. Therefore, it is difficult and expensive to distribute and supply ammonia as a base chemical to all places in the world. The technology developed by the start-up en­ables small-scale ammonia production, therefore decentralized, onsite ammonia production becomes feasible to provide easy and convenient use of ammonia in many locations where it is not possible today.

Environmentally friendly solutions are needed to achieve a sustain­able society, and ‘green ammonia’ is in the focus of various industries. When renewable energy is used to produce hydrogen in an electrolyzer as a raw material for the ammonia synthesis, the produced ammonia is called ‘green’ as there is no CO2 emitted from the process. Green ammonia is expected to be used for conventional ammonia applications as well as fuel for power generation, substituting existing fuels such as oil and gas. For green ammonia, onsite, small-scale production is needed, since it has to be used in decentralized locations in any country or region. Tsubame BHB’s solution using an electride catalyst will help to achieve these targets and with that establish a sustainable society. 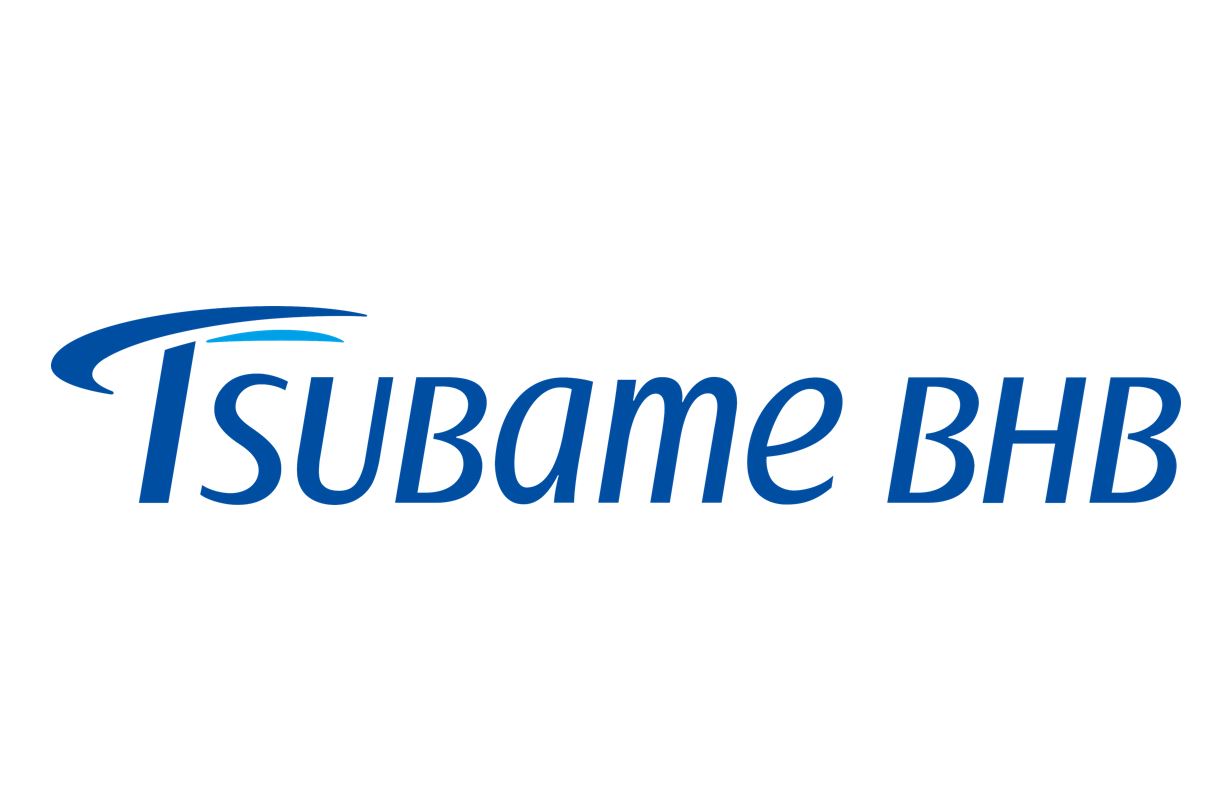 Tsubame BHB owns a proprietary ammonia synthesis catalyst technology and develops small-scale ammonia production systems. The company aims to solve the environ­mental and societal issue of CO2 emissions as well as food farming-related issues in developing countries as ammonia is an essential chemical for fertilizers. Moreover, conventional ammonia is produced from fossil fuel, and with that emits large amounts of CO2 during the production process.

Tsubame BHB’s new process enables ammonia to be produced at lower pressure and lower temperature than the conventional process, and therefore, can be produced in smaller scale. Based on a modular system, the technology can support ammonia and fertilizer production anywhere economically. When combined with renewable energy for hydrogen production, the process contributes to one of the key aspects of the UN SDGs, to reduce CO2 emissions.

The start-up continues to devel­op its technology in order to meet the variable supply of hydrogen by renewable energy. Recently the start-up entered into a cooperation with Mitsubishi Chemical for investigating the possibility to use membranes in the reactor in order to continuously separate the ammonia from the feed gas. This would allow to run the process as a sing­le throughput, and the cost and energy intensive recycling of the feed gas could be omitted.

Bioforsense — From Waste to Value

Rethinking the Base Material Side