16.09.2021 - B4Plastics is a Belgium-based biotechnology start-up and a polymer architecture company looking to catalyze the introduction of novel biomaterials and growing them from niche to bulk applications.

Based on their technology platforms, they enlarge the B4P bioplastics library with unique backbones and search for the most advanced ecological solution for plastic materials. Stefaan De Wildeman, founder and director of B4Plastics, talks about the origin, mission and future plans of the company.

CHEManager: Mr. De Wildeman, you founded B4Plastics 7 years ago. Did it start just then or is there a story before the story?

Stefaan De Wildeman: It really started in 2008 when I quit my bio­catalysis scientist role and became a bioplastics scientist over the weekend instead. I first came up with a list of potential building blocks which would form the links for building up new polymer chains that could be turned into novel bioplastics. That finally resulted in our name: bio-based building blocks (B4) for plastics. Later, using cupcake forms and a second-hand oven, I started to “bake” the first biomaterials in the greenhouse at the back of my yard.

What was your aspiration to start a company of your own?

S. De Wildeman: B4Plastics started in my head as the pressure on the plastics industry was increasing, and sufficient competences in companies were visible to make a change. However, it is not because novel bioplastics are being discussed and promoted on social media that it also happens automatically in industry and in real life. Therefore, I was attracted to the idea of creating a start-up firm, as I believed that those were not bound to running assets but used bio-spirit as fuel instead — for some time at least, and also since I was convinced that this was the only feasible way to really initiate the change that was necessary.

What kind of support did you receive, and which obstacles did you have to master so far?

S. De Wildeman: In 2017-2018, the company entered into three new Flemish and European partnerships which provided the funding to develop new plastics and biocatalysts. We also released our two initial product lines, Compost3D and Biorix, and attracted the first employees to join the B4Plastics team. Since then, we grew to a strong expert team, countering the technical challenges daily. Underway, we bootstrapped towards the first million EUR of turnover, backed up by some loans and subsidy projects. The biggest obstacle has been to leave the golden cage as an engineer in the old industry and radically go for still vague signals that a totally new plastics economy is un­avoidable — and someone has to start (co-)creating it.

When did the start-up enter into the growth phase and where are you now?

S. De Wildeman: In 2020, B4Plastics has seen an unprecedented growth phase, marked by the build-up of a new laboratory, the launch of our new website, reaching a headcount of 10 employees, selling 14 million compostable Biorix straws in shops across Belgium, and being selected by the European Innovation Council to join the 2% top league of European Green Deal Scale-Ups. One year later now, B4Plastics has made a dedicated team operational to develop key competencies in R&D, sales and production, while expanding further into bio­technology with a new lab.

What is the USP or differentiating feature of your company?

S. De Wildeman: B4Plastics offers the highest accuracy and speed bringing designed bioplastics from gram to ton scale. This is made possible by relying on our technology diagram. We use (local) rest streams and transform them into valuable bio-based building blocks that can be readily implemented in the polymer backbones. Being polymers architects, we design these novel biomaterials in such way that they fulfill the application requirements offering the best balance between function, ecology and cost.

What have been the most exciting projects so far?

S. De Wildeman: The BBI JU project Vipriscar has ended in June 2021 and validated the industrial production of the monomer isosorbide bis(methyl carbonate), or IBMC, which opens up a bright future for the development of new non-toxic polycarbonates and non-isocyanate polyurethanes. Currently, another BBI JU project, Glaukos, has also received a lot of attention due to the impact of plastic waste, as there we focus on the design and development of new bio-based and biodegradable fishing nets and textiles.

What will be the next steps to de­velop the company?

S. De Wildeman: At B4Plastics, we want to further deepen our polymer architecture roots as a biotech company and keep on enlarging our bioplastics library with unique backbones, with our technology platforms as strong basis. Next to that, we want to continue enforcing our team strength and expertise with a large diversity in age, capabilities and gender — women represent 50% of our team. From there, we are underway to establish the first specialty bio-plastics production site in the world in Belgium.

PERSONAL PROFILE
Stefaan De Wildeman graduated as a Bio-engineer (KULeuven, 1998) and finished his PhD after discover­ing a new dehalorespiring bacterial species (Ghent University, 2002). He joined DSM in 2002 and increasingly explored new biobased build­ing blocks (B4) for novel materials. From there, Stefaan co-developed the Master “BioBased Materials” and created the Chair of Building Blocks at Maastricht University. His hunger for social impact made him the founder of B4Plastics — a polymer architecture company design­ing novel polymeric backbones from new B4, with highest speed and accuracy. Since 2020, B4Plastics ­joined the top-2% league of Green Deal Scale-Ups in Europe and is one of the fastest growing bioplastics companies worldwide.

A Fast Move from Idea to Market
Just as an architect creates any-one’s dream home, the B4Plastics team creates dream plastics. They design and scale the materials to give a customer application the best balance between function, ecology and cost. This is done in three phases: screen — scale — supply.
The screening stage happens at the prototyping level (TRL1-4). First, the team defines and lists the key requirements of the bioplastic in its application based on green, optical and mechanical character­istics.
With this information, the experts design the polymer architecture and develop prototype sample materials in the lab within a time frame of several months.
When the prototype boxes are checked, the project enters into the second phase. In the scaling phase, the project moves up to pilot scale (TRL 5-8) to pilot the material for in-house tests or trials with re­nowned brand owners for validation and certification.
Finally, when all is validated and certified, and supply agreements are made, the team pushes the novel materials and their products to (kilo)ton scale in the third and final supply phase.
Currently, B4Plastics is develop­ing the first specialty bioplastics production site to secure the manufacturing and finishing of the first commercial-grade materials and their products.

Relying on this business strategy, the products have already demon­s­trated the power of the start-up’s technology platforms: 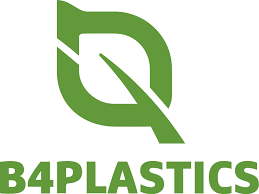 Reduce. Refuse. Rethink.
Stefaan De Wildeman founded B4Plastics with the aspiration to create new environmentally friendly plastics for a better planet. The Belgian start-up company has already opted for “reduce” and “refuse”: pushing the old fossil plastics towards the new plastics economy. Being convinced that there is a whole new redesigned plastics universe waiting for use they “rethink” the plastics industry by building materials on a molecular level, to give them the best balance between functionality, ecology and cost. At B4Plastics, new polymer ambitions are in the hands of a team of biobased-materials engineers, masters and experts — educated to create new material value chains, from the field to the product, and back.

Bioforsense — From Waste to Value

Rethinking the Base Material Side