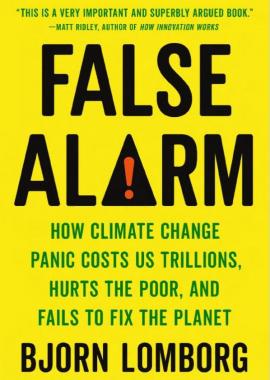 How Climate Change Panic Costs Us Trillions, Hurts the Poor, and Fails to Fix the Planet

Bjorn Lomborg's new book is subtitled: How Climate Change Panic Costs Us Trillions, Hurts the Poor, and Fails to Fix the Planet

Hurricanes batter our coasts. Wildfires rage across the American West. Glaciers collapse in the Artic. Politicians, activists, and the media espouse a common message: climate change is destroying the planet, and we must take drastic action immediately to stop it. Children panic about their future, and adults wonder if it is even ethical to bring new life into the world.

Enough, argues Bjorn Lomborg in his new book False Alarm - How Climate Change Panic Costs Us Trillions, Hurts the Poor, and Fails to Fix the Planet. Climate change is real, but it’s not the apocalyptic threat that we’ve been told it is. Projections of Earth’s imminent demise are based on bad science and even worse economics. In panic, world leaders have committed to wildly expensive but largely ineffective policies that hamper growth and crowd out more pressing investments in human capital, from immunization to education.

False Alarm will convince you that everything you think about climate change is wrong — and points the way toward making the world a vastly better, if slightly warmer, place for us all.

To check out the book, you can read the first 25 pages here for free.

What the author says about his book:

If there ever was a time to step back from climate panic, it is now. We live in a world where 57% of all teenagers are frightened of global warming. Across the world, almost half of all adults believe that global warming will likely lead to the extinction of the human race.

Global warming is definitely a real and human-made challenge, and one we need to fix smartly. But it is not the end-of-the-world. The UN Climate Panel estimates that in half a century (around 2075), the net negative impacts of global warming will be equivalent to a reduction in the income of every person of about 0.2-2%.

In the UN Climate Panel’s middle-of-the-road scenario, the income of the average person will in 2075 have increased 2.63 times from today’s income. And since climate change might in the worst-case scenario might make this income 2 percent lower, the income might instead increase 2.56 times compared to today. This is clearly a problem. It is also clearly not a catastrophe.

My book shows the many ways we are constantly being presented with alarmist climate rhetoric, such as worst-case scenarios disregarding adaptation. This generates clicks and scares children, but it is decidedly unhelpful for smart policy-making.

The book analyzes how our current climate policies are mostly ineffective and often phenomenally expensive (e.g. the Paris Agreement will cost $1-2 trillion per year in 2030, yet deliver almost immeasurable temperature reductions by 2100).

And then it shows the way forward, using the Copenhagen Consensus cost-benefit estimates of climate policies, highlighting especially green innovation, along with a moderate CO₂ tax, adaptation, geo-engineering and prosperity.

Yes, global warming is one of our many challenges. But unless we manage to spend less and spend smarter on climate, we’re not going to fix climate, while we are going to end up ignoring too many of the world’s other big challenges.

Let me know what you think!

Bjorn Lomborg is president of the Copenhagen Consensus Center and visiting professor at Copenhagen Business School. The Copenhagen Consensus Center is a think-tank that researches the smartest ways to do good. For this work, Lomborg was named one of TIME magazine’s 100 most influential people in the world. His numerous books include "The Skeptical Environmentalist", "Cool It", "How to Spend $75 Billion to Make the World a Better Place", "The Nobel Laureates' Guide to the Smartest Targets for the World 2016-2030" and "Prioritizing Development: A Cost Benefit Analysis of the UN's SDGs".