After a Record-2021, Will M&A in Chemical Distribution Keep Up the Pace?

06.05.2022 - Mergers & acquisitions activity in the chemical distribution industry was high in 2021, but current macro-economic conditions may have a dampening effect on the number of deals that will conclude by the end of this year.

This time last year, when looking at the M&A activity in the chemical distribution industry, we had just observed a record Q1-2021, with already more than half of the transactions that had been captured during the entire year of 2020 announced at the time. While some of these projects may have been a carryover from the previous year, it was back then not such a brave move to predict that activity for the year would quite likely return to pre-pandemic levels. And return it did.

Not only in terms of financial performance of chemical distributors, but also in terms of M&A activity, 2021 was a record-setting year. After the relative low in 2020 of just 36 transactions, which was mostly attributed to difficulties in feeding valuation models with reliable forecast data during the Covid pandemic, 2021 saw a total of 64 deals. This is an all-time high in our statistics, which goes back to the year 2009.
Typically, Q3 and Q4 of each year show the highest number of M&A announcements on average (since 2009 amounting on average to 27 and 29%, respectively, of total announcements per year). The comparatively high level of activity in Q1-2021, with 19 announced transactions (or 30% of the annual number), only 2016 came close to that with 17 deals (or 38% of the number for the whole year), would indicate that there was some carryover from 2020. We would argue that projects were brought into early 2021 for completion, in order to base valuations on full 2020 results and also have more robust forecasts than the ones available during the early part of the Covid-19 pandemic and the resulting lockdowns.

“The financial community believes that there is space for yet a few more distribution firms with activities around the globe.” 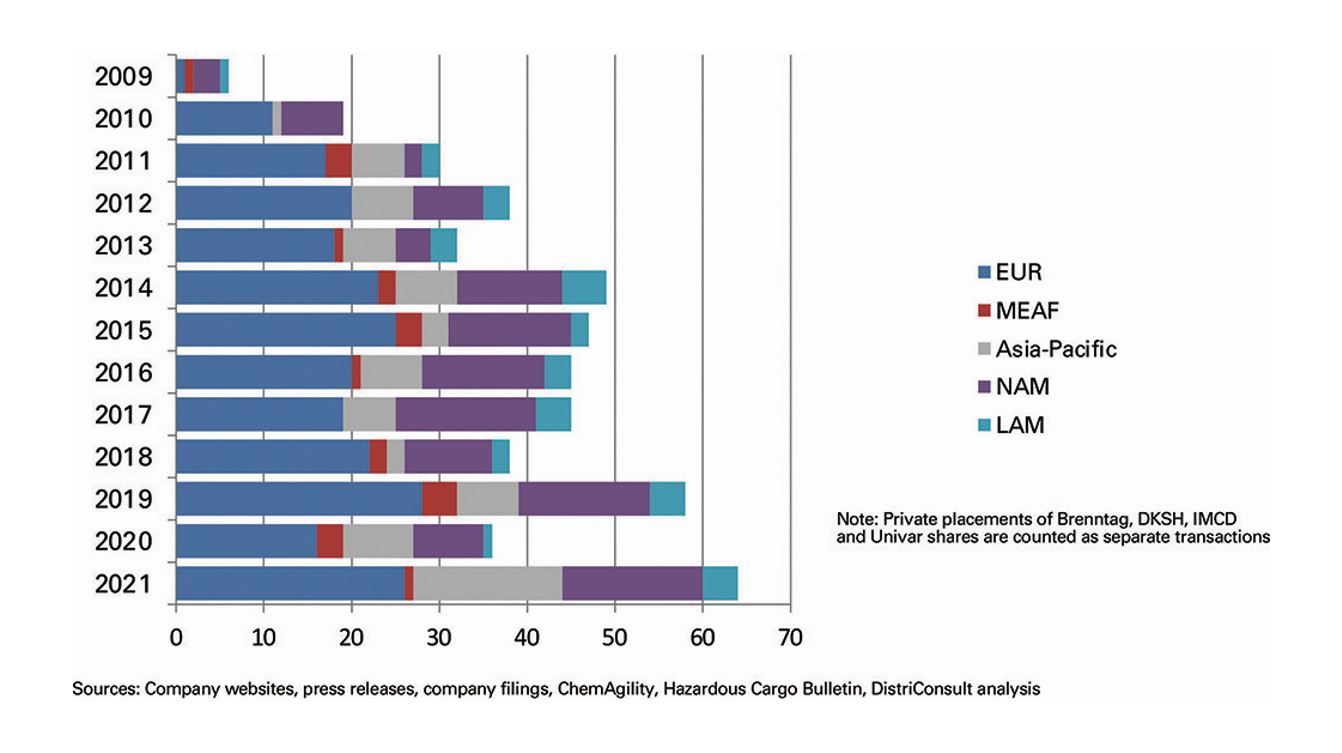 Two Large Transactions Involving Private Equity
During 2021, the most significant events in terms of size and relevance were transactions by two private-equity-sponsored companies. The initial public offering (IPO) of Antwerp-based Azelis at Euronext in Brussels in September is the (temporary) endpoint to a “buy & build” model, that has its origins in Italy in the late 1990s, involving a string of financial sponsors over time. Temporary, because Azelis has made it clear they will continue to add on businesses as they did under full EQT Private Equity’s ownership. With this IPO asset managers now have a range of listed chemical distributors that they can invest in.
Azelis will probably need to see some further placements of stock to have a large-enough free float, so that the company is eligible for inclusion into theme funds or other investment products.
The second large acquisition was that of Caldic by Advent International and the subsequent combination with their existing investment in GTM/QuantiQ. This allowed Goldman Sachs to exit their circa three year-long investment in the Rotterdam-based distributor in November. And for Advent this will be an opportunity to put the investment in the industry on a broader, more sizeable basis by covering a much wider geographic area than the initial investment in Latin America did.
The latter shows that the financial community believes that there is space for yet a few more distribution firms with activities around the globe. Another member of this category is Barentz, part-owned by investor Cinven, who just recently have announced the acquisition of Unipex. The company has made a significant step forward with the acquisition of Maroon Group in the US at the end of 2020. This particular transaction was interesting in two ways: it enabled the establishment of a strong presence in the US in one sizeable deal and also showed that in order to get to a critical size Barentz had to go beyond its focus on life sciences (particularly food, feed and pharma) and also add “technical” application areas such as coatings, adhesives, sealants and elastomers (CASE) to the portfolio. 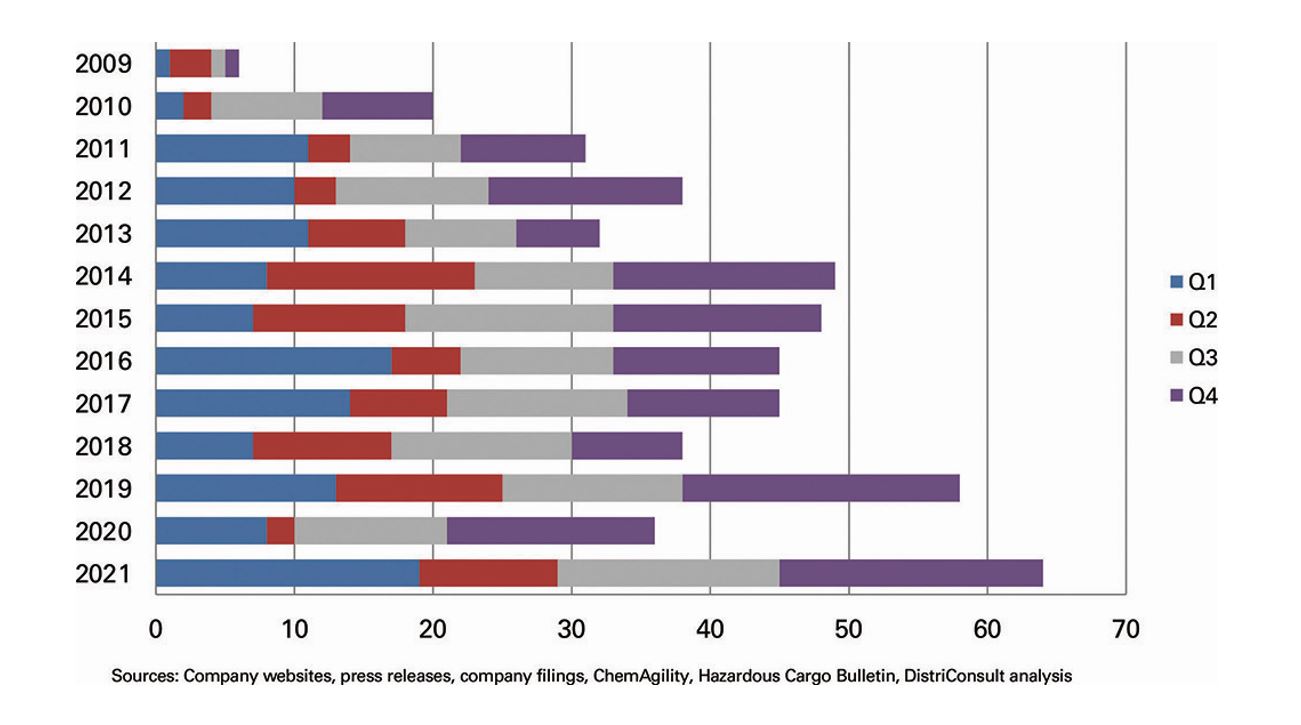 Listed Companies Continue Growth by Acquisition
The larger listed chemical distributors also have been quite active in 2021. Serial acquirers Brenntag and IMCD were able to buy four and eight companies, respectively. DKSH made three acquisitions (business unit Performance Materials, only). Univar made one acquisition in Latin America (Brazil). Many of these transactions can be classified as “consolidation” moves, i.e., the takeover of companies in industry/country combinations where the acquirer is already active. In some cases, this presence was built by acquisitions made prior to the Covid-19-triggered slowdown. It is also worth noting, that at times relatively small companies were acquired, as long as the individual deal served the strategic and programmatic growth targets of the buyer.
Although not directly related to acquisitions, another event in the financial sphere is worth mentioning. In September 2021, Brenntag was included into Germany’s leading stock index DAX, which at the same time was also expanded from 30 to 40 companies as part of a broader reform. Such developments, even if they pertain to a specific company, help to raise the profile of the whole industry, which is regularly featuring on the watch list of the financial community by now.

Filling The Gaps
But it is not only these larger groups that make acquisitions. Quite a number of mid-sized, privately held distributors have acquired businesses and entered new geographies, as the consolidation of the industry continues. In Europe the companies that have been active here include Biesterfeld, Krahn Chemie, Lehmann & Voss, Oqema, (all Germany), Ravago Chemicals (Belgium), Giusto Faravelli (Italy), Safic-Alcan and Lavolleé Chimie (both France). Since these companies have, in recent years, enjoyed excellent profitability, ensuring a high cash generation, more activity can be expected from this type of companies in the future.
While they have nicely filled war chests at their discretion, management and owners of such companies are often a bit conservative in their approach to valuations. Also, they are typically less willing to take on financial leverage than private-­equity-owned or listed companies, for whom showing the momentum of steady quarter-by-quarter growth is more of a necessity in view of equity market expectations. The mid-sized companies are mostly filling in the blank spots in their geographic coverage, which they may still have in Europe. And the more adventurous distributors may also invest outside of their home continent.

What Is Next?
In our view, it will be the macro-economic drivers that will influence developments in the coming quarters. High energy and (agricultural) commodity prices will have a significant impact on the activity across industry sectors through higher input cost. Add to that the potential of further disruption in global supply chains to product availability on the supply side. But also on the demand side, when consumer sentiment changes and demand for formulated products stagnates or declines, either because price increases make them unaffordable or the purchasing power weakens through inflation as discretionary income declines. Quite likely this will leave some skid marks in the financial results of distribution companies, maybe not in Q2, but eventually later in the year. Valuations may be again a bit trickier against such a backdrop. And as M&A activity is usually related to the performance of equities in general, this may have a dampening effect on the number of deals that will conclude by the end of this year. Not so much of a rosy outlook for the pace of deals after all.

M&A Activity Will Continue, No Doubt!

Trio of Rivals Line Up For 3i's Azelis